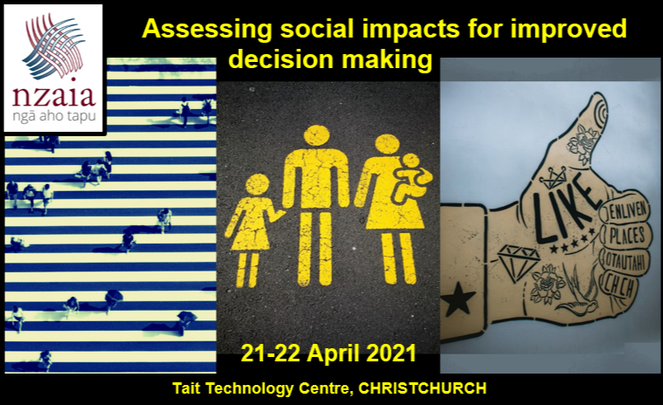 Reflections on the conference

I was selected as one of the recipients of the NZAIA conference awards. I was very excited and enthusiastic to participate in the conference. NZAIA conference made me aware on various topic and issues to address in Social Impact Assessment (SIA). It was not only from the environmental perspective, but it gave me a broader knowledge to see the SIA process. As SIA is required to commit to a decision and policy-making, it has also a specific analysis on the impact’s coverage and how various strategies may contribute to the decision-making process.

The various topics and stakeholders invited during the conference had enabled me seeing a creative strategy during the process. For example are on the engagement process, information transfer and how SIA works in actual practice. The topic brought during the conference was broad, about the existential challenges of the indigenous people, the legislative view of SIA through the RMA amendment, the assessments of SIA in a wellbeing framework, another implementation of impact investment practices, and SIA implementation through the various conditions, as well as the use of arts. The knowledge and information from the ground had given me a broader perspective on the use of SIA. SIA impacts on many aspects of the environment, social and economic sectors. For example, how the analysis on the use of wellbeing framework had influenced the operationalization of He Rangitapu He tohu Ora and for choosing the impact investment decision as part of the impact measurement framework. This concept is a fascinating strategy because it could benefit society by protecting the environment. Another example shown was on the use of arts in SIA, such as using social and visual arts like a predator-free printmaking process held in Stewart island to involve public awareness and contribute to the decision-making. The Stewart island project had given specific value on how the SIA was implemented and to which the impacts had been covered.

Before the conference ended, there was groups' discussion on the topics selected by all the participants for the SIA implementation. This group discussion became a way for a reflection on the SIA's implementation. Everyone could share a method for implementing SIA. It was exciting since the various stakeholders have different skills and knowledge backgrounds, which enriched the discussion. It had also given me an analysis on how the obstacles of SIA in the implementation process.

Second question from me is on the sustainability of the implementation. Even if SIA is created to assist a specific project basis, would it be sustainable for future implementation? What if there are different concepts in seeing these issues, such as different understanding on the baseline of data, or Resource Management Acts which are not fully understood by everyone. SIA is possible to have a failure in the project's implementation without vigorous enforcement and effective mechanism. Thus, should the conference also address the preventive mechanism on the failure of SIA? What strategies to consider in order to prevent such failure? Therefore the SIA implementation will be more practical and feasible to assist the project implementation.

As part of my reflection, there are two conclusions on implementing SIA, as well as the benefit of stakeholder’s involvement. First, the involvement of stakeholders in the SIA process should be broad and various because it will be relevant for the implementation process. However, the SIA design should not be locked in the beginning with the existing data. It could be changing of data in the future. Using a living baseline and data would be much an advantage. The data might change due to the dynamic of environment and social factors. Thus, a revision could be held to adjust the data used during the implementation. Second, the SIA should have a legal binding mechanism to achieve the project's goal. Using social engagement to solve the issues and awareness of the community would contribute to the effective actual implementation. Therefore, it will encourage the community and individuals to participate in the SIA design and project’s implementation process. This is possible to achieve sustainability when the benefit is also achieved by the community.
Reflections on the conference:

I was lucky enough to be awarded one of the NZAIA scholarships to attend the conference on social impact assessment. Attending the two-day conference in Christchurch was an amazing learning opportunity that taught me a great deal by listening and talking to the people in attendance. The topics covered by the different speakers were interesting and all so diverse, leaving me much more knowledgeable in the field of social impact assessment. I am very grateful that I was able to attend so that when I go into the work force next year it will inform my practise and overall make me a better planner. I really enjoyed the conference as I got to talk to and learn so much from all the people in attendance.

Over the two days of talks I learnt a lot about the issues that surround social impact assessment. I found the talk on emerging issues that influence impact assessment, which outlined digitisation, politicisation, intensification and professionalisation as issues and talked about the impact of COVID-19 really useful and insightful with how much the world changed in the last year. While this talk was based in Australia, these issues are very real in New Zealand so learning about them and then having the talks that followed discuss tackling them was really informative. This was then later followed by a talk about a pandemic responsive planning tool, where both speakers gave a view of the pandemic and its relation to planning and decision making that I found really insightful. The variety of speakers throughout the conference came from different fields and different companies gave interesting insight as to how the common theme of social impact assessment is approached. Due to the various speakers and the wide range of topics covered it provided me with the tools to make me a better planner.

While there were talks about what and where the issues are for social impact assessment, there were a lot of talks about the future and improving decision making. I think by redefining wellbeing and incorporating it into decision making it ensures the wellbeing of all those impacted. I found the Trust Tairawhiti framework of wellbeing to be a great model to implement in future decision making. I think that the incorporation of the environment, cultural identity, relationships, communities, economy, and knowledge under the pillars of integrity, sustainability and equity should be what is implemented going forward. Overall, I found the conference aa incredibly informative two days with a really interesting and knowledgeable group of people. I feel very fortunate that I was able to attend.
Reflections on the conference:

The two-day Social Impact Assessment Conference organised by the New Zealand Association of Impact Assessments was a great privilege to interact and share knowledge with SIA and IA practitioners from various professional backgrounds. Coming to the conference with an interest to build a clear understanding of the “WHYs & HOWs” of SIA, the conference challenged my knowledge on how various private and public policies, plans and projects affect people’s ways of living. It also gave me insights on how SIA is integral to the success of projects, plans and policy decisions implemented at various levels.

The presentations and discussions throughout these two days were pointing towards the same direction. Improving the SIA process to improve the outcomes and ensure sustainability of projects, plans and policies, with an aim of safeguarding and enhancing the wellbeing of people. Ideally, social impact assessments did not have to be mandated by legislation, rather their value in contributing to a more sustainable world by enabling stakeholders engage better and continuously improve projects, programmes and plans ought to be the main motivation for streamlining SIAs in decision making processes.

The conversations in these two days also highlighted the need to follow other impacts e.g. climate change, environmental and economic impacts through to their social impacts as experience has shown that every impact has a long chain of social consequences associated with it. Economic impacts like changes in income levels go on to affect the ability of families to access daily basics, in some cases leading to complex behavioural changes that affect how family members relate. Impacts on the physical environment would go on to affect how communities benefit from the numerous ways in which these systems support their health and wellbeing. Rather than using this understanding to bypass a full SIA, as has been the practice, a stand-alone SIA would help dig deeper and provide in-depth details on how individuals, families and communities will be affected by decisions being made at different levels. More importantly, a broader SIA provides opportunities to identify and foresee positive impacts which if well enhanced, can improve outcomes of our activities and decisions.

From the conference, it was clear that the management of the identified and predicted impacts remains the main gap in SIA practice, just as it is in other forms of IA. Clearly, the challenge to SIA practitioners and all involved in IA is to commit to the development of methods and techniques that will improve the way SIAs are conducted, and most importantly, to be willing and committed to use the results of the process, rather than doing SIA just to satisfy regulatory requirements. The emphasis here is on the actions and steps taken after the identification of effects since, going by the “Noah Principle”, predicting rain doesn’t change issues, building an ark does.

While the challenges impacting the SIA process e.g. lack of usable data, disasters, pandemics and short supply of SIA practitioners were part of the conversations, it was encouraging to be introduced to emerging tools like “The Charette” and “Social Arts Practice” that have the potential to improve public consultation and community engagement, as well as He Rangitapu He Tohu Ora, the wellbeing framework tool that is being used to understand community priorities for an informed assessment of impacts and an effective management of these impacts at their appropriate level.

My appreciation to the NZAIA for funding my participation in the conference. The knowledge, skills, and networks built from the conference are building a SIA professional who will not only contribute to SIA but in other forms of IA as well. With your basket and my basket, the people will thrive!!