​In an paper published in March this year, Risk Frontiers normalised the Insurance Council of New Zealand’s (ICNZ’s) Disaster List. Normalisation is the process of estimating the costs to the insurance sector of historic events if they were to occur now under current societal conditions. Normalisation is necessary to draw conclusions about trends in the cost of natural disasters and the impact of climate change.

As with other normalisation processes that Risk Frontiers has completed for the Insurance Council of Australia, the methodology employs changes in the number, size, and nominal cost of new residential dwellings as key normalising factors. The methodology is further described below, and the key results are presented. Additional results, discussion and policy implications are contained in the published paper.

The Insurance Council of New Zealand’s (ICNZ’s) Disaster List documents private sector insurance payouts caused by natural perils. It dates from April 1968 with losses due to Ex-Tropical Cyclone Giselle and the sinking of the Inter-Island ferry, the Wahine, with the loss of 51 lives. The database is national in geographic extent and multi-peril in line with most homeowner and contents insurance policies in this country. Perils responsible include earthquakes and various manifestations of severe storms including flooding, hailstorms, tornadoes and high winds. In contrast to Australia, where over a similar time period some 94% of losses were attributable to weather-related perils, earthquakes have been by far New Zealand’s costliest peril. Special consideration was given to the Canterbury Earthquake Sequence (CES) because it is such a dominant feature of the loss history.

Our analysis predominantly dealt with reported losses paid out by private insurers; however, it also considered claims paid by the Earthquake Commission (EQC) for major events since 2000. Prior to July 2019, the EQC payout was capped at NZD 100k and NZD 20k for residential building and contents damage respectively and also provided for some types of damage to land. Beyond these limits, private insurance was (and is) available to cover the balance of greater claims. After reviews of EQC following the Canterbury Earthquake Sequence (CES) building damage limits have been increased to NZD 150k and EQC does not now cover contents damage.

where i is the 12-month ‘season’ extending from 1 July year i to 30 June year i+1 during which the loss event occurred. The division by Australian financial years rather than calendar years was adopted, in-line with Crompton and McAneney (2008), to take account of the southern hemisphere seasonality of the meteorological perils.

j is the set of New Zealand regional councils (of which there are 16) impacted by the event. These regions form one of several interrelated structures outlined under Stats NZ’s Statistical standard for geographic areas 2018.

Both dwelling value and size were derived from Building Consents data, available at Stats NZ Infoshare.

Special consideration was given to normalising insured losses arising from the CES because of subsequent changes to land-use planning regulations in and around Christchurch and the introduction of more stringent building codes. Elimination of large tracts of houses vulnerable to liquefaction resulted in a large reduction in the number and nature of the properties exposed to future earthquakes. These reductions are unprecedented in New Zealand, and no comparable adjustments would apply for other historical New Zealand earthquakes between 1968 and 2019. To deal with these changes, which will undoubtedly influence future losses if an event like the CES were ever to be repeated, Equation (1) was modified with two additional adjustment factors:

where LE accounts for the reduction in the liquefaction exposure because of the designation of red-zoned areas where building is now prohibited and BC accounts for the increased stringency of seismic construction codes introduced in the wake of the CES.

Based on our analysis we estimate that the private insurance sector and EQC losses, normalised to account for the building code change as if buildings were to be brought up to code, are reduced further, in the ratio of 33% and 72% respectively. The effect of the code change is to reduce the damage ratio (DR = claims cost/replacement cost of building) for the new code level (peak ground acceleration = 35%g) up from its pre-CES value (22%g); in short, buildings built in compliance with the new code will be more resilient to seismic ground shaking. The adjustment factors LE and BC are different for private insurance sector and EQC losses, so equation (2) was applied separately to each loss and the result then summed to give the overall normalised event cost. For all other events except the CES, LE and BC default to unity.

Table 1 ranks the top 10 most costly normalised loss events. Earthquake losses rank first, second and third, with the 2010 CES the most costly at NZD 20.1 billion (including EQC costs). Losses due to CES have been aggregated (as is the case in the Disaster List) because of the difficulty of accurately distinguishing losses caused by individual earthquakes within the sequence. The remaining entries are largely attributable to different manifestations of extreme weather, including the loss of the Inter-Islander ferry in ex-tropical cyclone Giselle in April 1968.

Time series of seasonal aggregated event losses are shown in Figure 1 (A,B) in both their raw and normalised forms respectively. The time history is dominated by large earthquake events particularly the CES losses. Excluding the Christchurch, Kaikoura and the Bay of Plenty earthquakes, McAneney et al. (2021) found that the raw data, which now are dominated by weather-related events, show an increase in the losses over time, but once these are normalised for the societal changes we know to have occurred, there is no significant increase in losses with time. 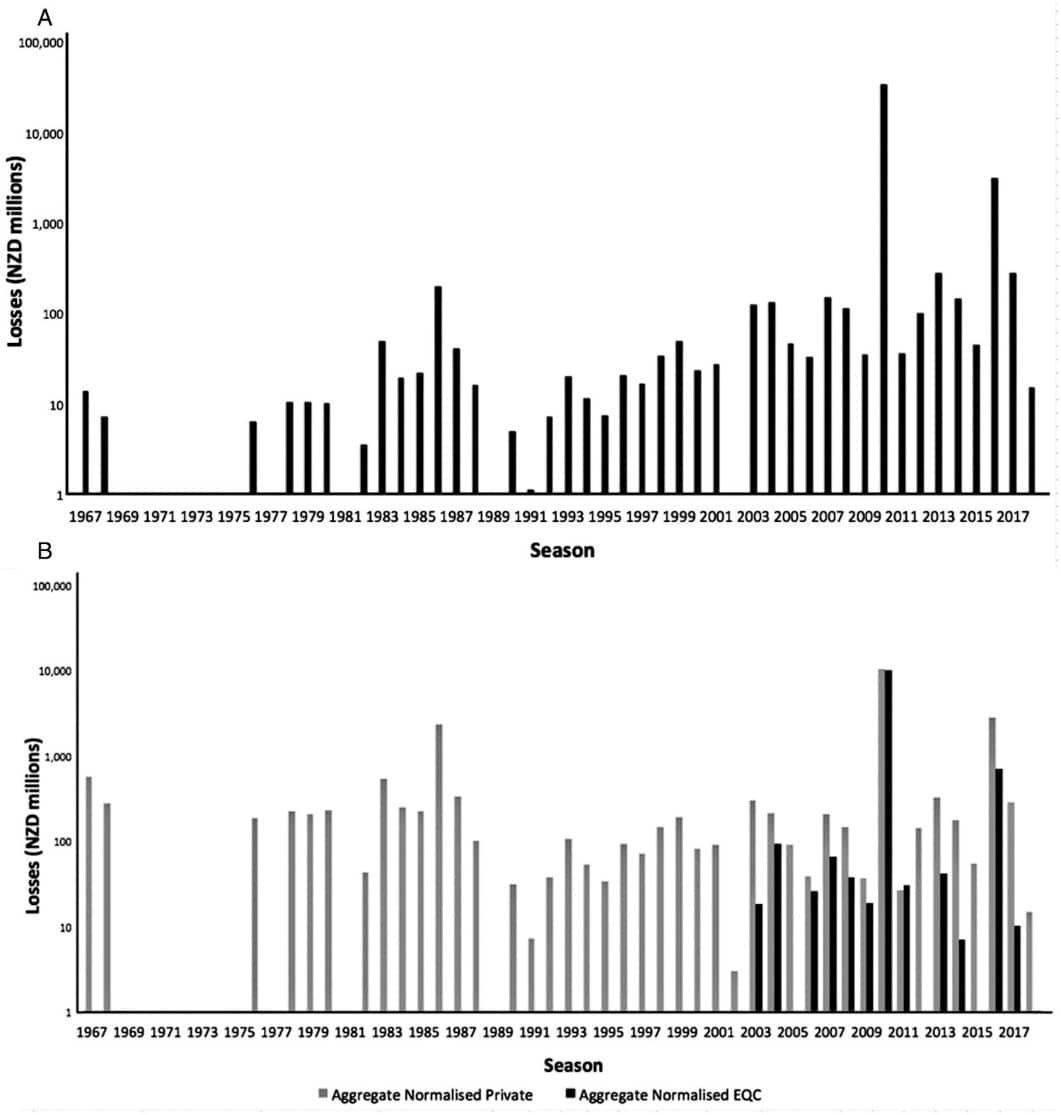 ​The Insurance Council of New Zealand’s Disaster List documents private sector insurance payouts caused by natural perils since April 1968. We normalised these and, where possible, payments made by the Earthquake Commission, as if historical events were to impact current societal conditions. The methodology employs changes in the number, size and nominal cost of new residential dwellings as key normalising factors. Since 1968, earthquakes account for 79% of the normalised losses with the 2010–2011 Canterbury Earthquake Sequence (CES) at NZD20.1 billion the single most expensive event. The redlining of residential suburbs shown to be vulnerable to liquefaction, and the introduction of more stringent building codes, are estimated to reduce normalised losses for a repeat of the CES by about one-third. More frequent losses due to extreme weather, notably storms of tropical, sub-tropical and extra-tropical origin, when combined and after adjusting for changing societal factors, show no trend over the period 1968-2019.
Download as a PDF
About Risk Frontiers