Banks Peninsula/Te Pātaka o Rākaihautū is a taonga for many different people: manawhenua of the five local Rūnanga, farmers, other landowners and residents of the Peninsula and the Port Hills, employees of business across the Peninsula, visitors from the greater Christchurch community, and visitors and tourists from around New Zealand and overseas.  We all share a love for engaging with this special place. Like all treasures, it is important to care for and protect the Peninsula so that it can be enjoyed by us, and by our children after us.

In November 2016, the Ecological Vision 2050 for Banks Peninsula was launched.  The Vision was first developed by the Banks Peninsula Conservation Trust but was then adopted by a range of councils, organisations, agencies and trusts working across the Peninsula. It is a vision for all groups and individuals living and working on Banks Peninsula/Te Pātaka o Rākaihautū including the Port Hills.

Te Kākahu Kahukura is part of the 2050 Ecological Vision. While all eight Goals of the Vision are relevant and interrelated, Te Kākahu Kahukura particularly supports Goal 4 which is to protect four core areas of indigenous forest of more than 1000 ha each.

Te Kākahu Kahukura is a voluntary landowner- and community-driven initiative.  It includes a range of private landowners, agencies, councils and organisations. It aims to facilitate and co-ordinate native forest revegetation and restoration on the Southern Port Hills of Christchurch City. Around the core area of regenerating forest, landowners are encouraged to plant native plants and carry out pest and weed control in a way which supports a thriving indigenous forest and plant community and allows native birds and other native fauna to move through the landscape.

The name of the project was gifted by both Te Hapū o Ngāti Wheke and Te Taumutu Rūnanga.  Kākahu means to dress or clothe as well as being a generic name for clothing and garments. It references the actions of Tāne Mahuta in clothing his mother Papatūānuku following the separation from his father Ranginui. Kahukura is a significant atua known in Ngāi Tahu traditions as being responsible for cloaking the wreckage of Te Waka o Aoraki with plants, forests and swamps, and populating these places with all the varieties of indigenous birds that dwell there. Kahukura is particularly important to the creation of the forests of Te Pātaka o Rākaihautū/Banks Peninsula and is remembered through the naming of a number of prominent peaks of the Port Hills including Te Tihi o Kahukura (Castle Rock) and Te Heru o Kahukura (Sugarloaf).

While this is primarily an ecological restoration project, one of the project’s objectives is to support the national carbon emissions reduction goals and Christchurch City Council’s carbon neutral by 2030 goal.

There is considerable interest from a range of Christchurch individuals and businesses to fund native forest regeneration to offset or mitigate their carbon footprint.  That interest is increased if the offset is seen to be done locally and somewhere that can potentially be visited.

Some of the land may be eligible under either the Emissions Trading Scheme regime or the Billion Trees Programme.  However, both the carbon credit schemes available (ETS and voluntary alternatives) and the Billion Trees funding are opaque, and eligibility is unclear in many instances and appears to depend on officials exercising judgement in individual cases.  That introduces uncertainty and requires costs in advance to determine eligibility.

Consequently, the Banks Peninsula Conservation Trust is exploring the concept of creating a mixed biodiversity and carbon sequestration opportunity which is simple to apply and ecologically robust and which demands a premium because the biodiversity is ‘certified’ or ‘approved’ as being part of a recognised ecological restoration project. This will generate additional revenue for landowners who voluntarily participate in the project. 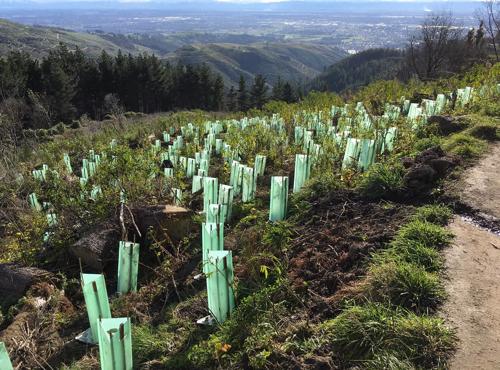 A parallel scheme for funding relates to what is known as ‘enrichment planting’.  Forest regeneration is encouraged to occur naturally.  However, Te Kākahu Kahukura includes what is known as targeted ‘enrichment planting’ within the regenerating areas of old-growth tree species that are now rare in the area (such as tōtara, mataī, kahikatea, and tītoki). Because seed sources are so limited the natural spread of these species will take many centuries. This process can be sped up through strategic enrichment plantings where these species are planted into existing areas of regenerating forest and restoration plantings at low densities, with the expectation that they will eventually become dominant in the mature forest.

Funding which is generated through this tree planting and carbon sequestration scheme will pay for the planting and maintenance towards maturity of these ‘enrichment’ trees. The trees will only be planted in reserves or covenanted areas (or similar) which have in place a management plan approved by the Banks Peninsula Conservation Trust so they will be protected in perpetuity.
In addition to providing ecological benefits, these native podocarp trees increasingly sequester carbon over time until they are mature.  By donating the funds for the purchase, planting, and management of these trees, participants can mitigate or help offset their carbon emissions as those trees grow towards maturity.

This scheme allows participants to estimate, using a ‘carbon calculator’, how many of these enrichment trees are required to grow to maturity to sequester sufficient carbon to mitigate or offset the carbon from various activities. Donations for the purchase, planting and management of the trees are made to the Banks Peninsula Conservation Trust who will manage the planting and maintenance process as part of Te Kākahu Kahukura.

A third funding option being considered is an offer by a large corporate to assist.  This corporate is looking to offset its carbon footprint.  The idea is that the corporate would pay for some planting and maintenance of trees on private land in return for which it will receive the benefit of any carbon credits generated. The proposal is that the planting be of mixed native and exotic hardwood (but not pine) species.  The exotics are expected to operate as a ‘nursery crop’ so that the native vegetation would dominate in due course but would be better able than native vegetation to sequester carbon in the shorter term.

All this raises the need to undertake an impact assessment of the various options in terms of:

Even with a positive ecological restoration proposal such as this it is important to understand and appreciate that there could be unintended, and especially adverse, effects from the project.  An example is the impact of climate change. Current climate modelling suggests that one of the main factors likely to have a marked influence on Banks Peninsula/Te Pātaka o Rākaihautū biodiversity is an increasing incidence of droughts, although other extreme events such as floods and windstorms may also become more frequent. An increased incidence of droughts could well impact on higher altitude plants such as mountain cedar and mountain cabbage tree and rare species restricted to montane rock outcrops, making their long-term survival more tenuous.

Climate change will also likely mean changes in water yields from Peninsula catchments and an increased vulnerability to fire. Reduced water yields are likely to be particularly important because there is already competition for water resources (irrigation, stock water, domestic water, in-stream and riparian systems including wetlands). Reduced rainfall is likely to exacerbate this competition, especially if the human population continues to grow and farming becomes more intensive. Drought also creates conditions conducive for fire, and with increasing areas of woody vegetation (indigenous and exotic) developing across the Peninsula there is the potential for these fires to become larger and more intense than might have been the case when pasture was more widespread, as was the case with the February 2017 Port Hills fires. A greater number of people on the Peninsula also increase the chances of ignition events occurring.

And there is a range of questions to be considered such as:

In relation to this last issue there is no institutional framework that requires, or guides, impact assessments in such situations. Much of the funding for the project will come from philanthropic/council/government sources. Traditionally, funding from these sources is rarely given to assist organisations to measure their impact.  Moreover, philanthropic/grant giving is often distributed in the hope of a difference being made with little independent review. To demonstrate outcomes, rather than just outputs, there needs to be better accountability around environmental impact, not just financial spend.

A story within a story

Te Kākahu Kahukura and the 2050 Ecological Vision are, as the name suggests, primarily about ecology and biodiversity.   However, Banks Peninsula Conservation Trust is firmly of the view that this project and the wider Ecological Vision fit within a larger context.  Conservation is about people. The achievement of all eight Conservation Goals involves the community; identifying priorities, developing management decisions, implementing projects to achieve each Goal, monitoring progress and celebrating success.  People need this as much as our biodiversity does. A healthy natural environment is the foundation for everything that is of value to people – food, water, shelter, flood prevention, health, happiness and creative inspiration.  It is the source of our prosperity and our wellbeing. We want to inspire people about the environment around them so that they value it, understand their relationship with it, and take action to protect and restore it.

And how do we start to assess and measure the impact of the project in this wider context of social, cultural, and economic wellbeing?
Download Article as PDF