​The legendary Charlie Wolf describes the field of impact assessment as answering the questions “Who Gets What, When, How, Where and Why” by assessing impacts before they happen (Hayes, 2017). The fundamental components of impact assessment have adapted to different regulatory and cultural contexts, but otherwise have not changed significantly since the 1970s.  These components include scoping, considering alternatives, predicting impacts and evaluation their significance recommending mitigation measures, consultation, preparing reports and a decision by the designated regulatory authority (Banhalmi-Zakar et al, 2018:507-510, EIANZ, 2015). In this paper I focus on scoping as the first main step in project impact assessment, using two South African case studies.

EIANZ (2015) defines scoping as: “…the process of identifying and prioritising the key issues associated with a project to be assessed in an impact assessment (IA) and the extent of work that needs to be undertaken to address those issues.” Canter and Ross (2014, p21) suggest that scoping is essential for effective impact assessment but rarely done well. Weaver et al (1999) suggest that scoping should “serve as a priority-setting activity aimed at improving efficiency and providing a focussed product for informed decision-making”. Similarly, DEAT (2002) notes that scoping is a critical early phase of an impact assessment. 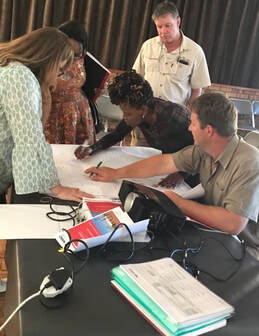 The National Environmental Management Act 107 of 1998 (NEMA) was promulgated in South Africa after the adoption of the Constitution in 1997 and guides individuals, institutions and government in environmental decision-making (Van der Linde & Feris, 2010). Chapter 5 of NEMA enables the application of appropriate environmental management tools in order to ensure the integrated environmental management of activities. The primary mechanism that NEMA uses to achieve this goal is the requirement for authorisation of activities that may have a significant impact on the environment.
​
Large infrastructure projects are subject to an environmental impact assessment process that informs decisions on authorisations.  This process includes a distinct scoping phase that culminates in a scoping report that must be made available to the public for comment before being submitted to the authorising authority.  The scoping report is reviewed and approved by the authority before the impact assessment can continue to specialist studies and the assessment and mitigation phase. The guideline for scoping published by South Africa’s national environmental authority (DEAT, 2002) presents definitions, outcomes, benefits and methods for scoping.

​The two case studies below demonstrate how scoping contributed to the impact assessment processes that informed decision-making on infrastructure projects under the South African legislation.

This electricity infrastructure project consists of a new 400/132 kV substation in rural KwaZulu-Natal, which will be integrated into the 400 kV network by 250 km of 400 kV and 165 km of 132 kV powerlines. The substation requires a flat 24 ha space.

The two endpoints for the powerline were known. The applicant and the environmental practitioner, in consultation with specialists and interested and affected parties, identified four technically possible 2 km wide corridors within which a 55 m right of use servitude to construct a 400 kV line could be acquired for each of the 400 kV powerlines. Sections of the corridors that were found to have obvious significant impacts were discarded, leaving two corridors which the environmental practitioner recommended be further assessed in the specialist studies and impact assessment phase of the project. The specialists and environmental practitioner also identified deviations from the 400 kV powerline routes to further avoid potential impacts identified by interested and affected parties and specialists during the scoping phase.

Technical alternatives considered during scoping included the burying of 132 kV and 400 kV powerlines to reduce visual impacts on the eco-tourism sector.

The following key issues were identified in the scoping phase:
One of the key issues that landowners affected by the proposed project raised was the impact on the eco-tourism activities and knock-on effects including a potential decline in property values, loss of jobs, and reduced budgets for conservation of animals. The socio-economic specialist study proposed in the scoping phase allowed for this set of impacts to be assessed on a qualitative level. Interaction with the landowners during the scoping phase highlighted that the project could be opposed should this aspect not be adequately addressed. Subsequently a more detailed economic assessment was commissioned.  If this gap had not been identified and action taken during the scoping phase, it could have resulted in delays later while this aspect was assessed, as described in DEAT (2002).

Public participation is a key aspect of scoping as it provides for stakeholders to table issues of concern, make suggestions for enhanced benefits, and comment on the findings of the EIA to that point. A database was established during scoping to record the details of stakeholders who wished to register for the project. Key stakeholders were identified and notified of the project and their opportunities to participate. A background information document was compiled and distributed to all registered interested and affected parties and at meetings. Newspaper advertisements were placed, in the two languages most spoken in the region. On-site notices were erected at 23 locations in the study area. Meetings were held with key stakeholder and authorities at four venues in the study area in order to present the proposed project to them and give them an opportunity to raise any concerns they might have. Similar meetings, in isiZulu, took place with each of the 31 Traditional Councils in the study area. Focus group meetings with organisations concerned about impacts on birds, farmers organisations and the landowners of the substation site alternatives also took place.  The issues and concerns raised, and local information offered, were used to inform the draft version of the scoping report.
​
The draft version was then made available for public comment. All comments made at meetings or submitted by other means were captured in a comments and response report and were incorporated into a final scoping report that was submitted to the authorising authority for review. The authorising authority accepted the final scoping report and the rest of the EIA of the project was undertaken according to the plan of study in the scoping report.

The main aim of the NZ$1.25 billion Mzimvubu Water Project is the socio-economic upliftment of the largely undeveloped and impoverished communities within the Eastern Cape.  The application consisted of two new large dams, a potable water supply scheme, irrigated agriculture, hydroelectric power generation and associated infrastructure.  The EIA was undertaken between February 2013 and December 2015 (DWS, 2015a). The project included new access roads and the re-alignment of roads and bridges inundated by the reservoirs, borrow areas and quarries, as well as the relocation of households and graves.
During the scoping phase of the assessment, high level alternatives including constructing smaller dams, developing groundwater resources, provision of water by rain-fed tanks, alternative sites for the dams, alternative dam types, and a number of smaller water sources rather than dams were considered.  The scoping process confirmed that other alternatives would not meet the project objectives and supported the preferred sites for the two large dams.  During the impact assessment phase, the assessment of alternatives focussed on powerline routes, alternative dam sizes at the preferred sites and hydropower generation options.

Key issues that informed the specialist studies and the next phase of the impact assessment included impacts on plants, animals, rivers, wetlands, the quantity and quality of instream flow, societal welfare, the landscape and sense of place, and the inundation of graves, archaeological sites, structures and livelihood-supporting resources, were identified as key issues.

The public participation process during the scoping phase included consultation with national and regional government. All authorities with roles that intersected with any aspect of the project were invited to an authorities’ forum that met on a regular basis.
Notification letters, background information documents and newsletters (in English and isiXhosa) were distributed to all registered interested and affected parties. Site notices and newspaper advertisements were placed in English and isiXhosa.  Comment periods were provided for draft and final scoping reports. 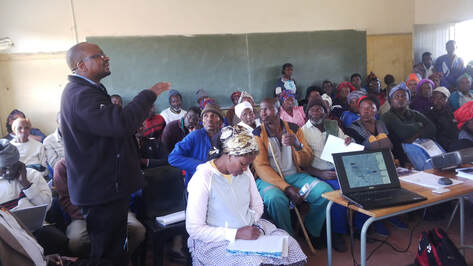 Public meeting at Laleni
Public and focus group meetings took place to introduce the project and allow parties to raise issues and concerns and provide local information. This information informed the draft scoping report that was presented at a second round of meetings aimed at providing an opportunity for parties to confirm that their issues had been accurately captured and incorporated into the terms of reference for the specialist studies.

The stakeholder database and an issues and responses report were updated on an ongoing basis and recorded every comment made in any meeting or received by any medium (e.g. e-mail) and how it was addressed in the impact assessment (DWS, 2015b).

Benefits of robust scoping in the case studies

A robust scoping process with extensive public consultation was a valuable part of both these case studies from South Africa. The scoping processes reduced costs, delays and objections received, built relationships with stakeholders and sped up decision-making, all identified as benefits in IEMA (2011). It also facilitated co-operation between government departments with mandates associated with the projects.

The scoping phase enabled the environmental practitioner and project applicant to consider a wide range of alternatives at a high level and to narrow these down to acceptable feasible alternatives for detailed study in the impact assessment phase. The specialist studies and consultation process in the subsequent assessment phase of the process excluded alternatives that had been scoped out in the scoping phase. Input from consultation also allowed the scope of the specialist studies to be amended and expanded to cover all the relevant issues and concerns that had been raised.

Scoping prevented the unnecessary collection of information, for example ecological surveys of sites that were scoped out (Weaver et al, 1999) and increased the effectiveness and efficiency of the impact assessments and associated consultation (IAIA, 2018). Scoping focused assessment on those aspects that would influence decisions about effects and conditions for the projects (Canter and Ross, 2014).

My experience in Aotearoa NZ is limited to being on the receiving end of impact assessments as a regulator over a short period of time.

I observe that notification processes provide a transparent way for submissions to be received and considered. Pre-lodgement consultation with the relevant authority, and even the review of draft applications that include impact assessments is encouraged.  Processes have not, however, typically included a distinct scoping phase where all interested and affected parties and authorities have an opportunity to comment on the formulation of key issues, terms of references for specialist studies, impact assessment methodology, or proposed consultation process. The impact assessment reports that I have seen have had volumes of detailed information (IAIA, 2018), and scoping has often been limited to a very brief description of what will be assessed, with no apparent input from external parties.
Impact assessment to inform decision-making in Aotearoa NZ is currently grappling with how to weave mātauranga Māori into the traditionally western science approach to the assessment of environmental effects. Experience from EIAs for large infrastructure projects in South Africa leads me to consider that starting an impact assessment with a good scoping process that involves mana whenua, and other iwi and Māori groups could help to ensure better focus of the studies undertaken by specialists to inform good decision-making and to decide who does these studies.
​
Overall, the South African experience and the emphasis there on fully scoping an impact assessment suggests that this is an underrated part of impact assessment in Aotearoa NZ.
​
Disclaimer: The views expressed in this article do not necessarily reflect those of the author’s employer or any organisations that she is affiliated with.
Download as a PDF
References

Institute of Environmental Management and Assessment (IEMA) (2011). Special Report - The state of the practice of impact assessment in the UK.