When the New Zealand Coastal Policy Statement (NZCPS) was released in December 2010, local authorities were tasked under Policy 13 to map or otherwise identify (at least) areas of high natural character in the coastal environment. The NZCPS also introduced the new term, ‘outstanding natural character’. In defining natural character, the NZCPS clarifies that natural character is not the same as natural features and landscapes or amenity values and provides a list of eight matters which may apply in Policy 13 (2).

Whilst such guidance is useful for understanding the concept of natural character, it does not clarify how natural character relates to a landscape assessment. In seeking to clarify this relationship, natural character can be conceived of as a measure of the condition of biophysical landscape attributes. Such condition can vary as a result of levels of human modification and takes account of the way biophysical attributes are experienced i.e. the ‘feeling’ of being in a wild unmodified environment. By comparison, landscape evaluation considers a broader suite of biophysical, sensory / perception and associative attributes including aesthetic and scenic qualities alongside other shared and recognised values. 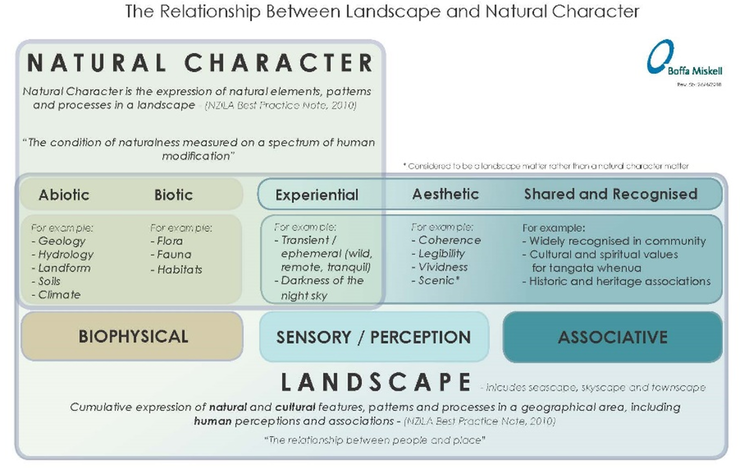 Any natural character methodology must be flexible and adapt to suit different types and scales of coastal environments. The outputs from natural character assessments are enhanced through terrestrial, freshwater and marine ecologists and other natural science experts (e.g. geomorphologists), as well as landscape architects and planners. However, assessing natural character is different to determining whether coastal features, habitats or species are geologically or ecologically significant.
In essence, assessing natural character is primarily concerned with the degree to which biophysical landscape attributes have undergone human modification.  In the case of habitats and ecosystems for which human action has resulted in at least some transformation of New Zealand’s pre-human condition, assessment should consider how representative the current assemblage of species is relative to its possible natural successional stage. This also recognises that such natural character attributes can be restored or rehabilitated as promoted by NZCPS Policy 14.

Natural boundaries such as coastal escarpments and ridges can provide a clearly defined and logical inland boundary to the coastal environment. Coastal watersheds can also be helpful.  Where structures, such as roads and buildings are evident, these can dramatically reduce the significance of coastal processes, influences or qualities of the coastal environment. In ‘flat’ coastal areas, the significance of coastal influences may decrease gradually as you move inland. Consequently, mapping these areas can be challenging, and land use, coastal hazard lines and landscape character may help define where the inland extent of the coastal environment occurs.

For an area to have outstanding natural character it should exhibit an exceptional combination of natural processes, natural patterns, and natural elements, predominantly unaffected by human induced modification. In practical terms, when undertaking a district or region wide study, this requires re-examining areas or components identified as having at least high natural character and evaluating whether all or part of such areas stand out as exceptional.  Transparency of this assessment can be greatly assisted by use of a matrix which sets out indicators which identify where levels of natural character occur across the range of abiotic, biotic and experiential attributes assessed.
Areas of high natural character may also qualify as outstanding natural features and landscapes. However, other sensory and associative landscape attributes must also be considered when undertaking a landscape evaluation which determines whether a natural landscape or natural feature also qualifies as outstanding.